Crap. Basin Day. My friend Kenny is still two days behind me and god knows I can’t dawdle here for two days. I need to suck it up and head out.

The cabin included breakfast in Wild Bill and his wife’s house. I go in and WOW stuffed big game everywhere. I have to face the one wall without them. Their eyes were burning into my soul. Breakfast was delicious, waffles, cheesy eggs, real coffee and cream. Well minus the whole feel the animals stare at the back of my head bit. They were very very nice but subtle comments about women with morals started to creep through. Ok yep definitely time to leave.

It was going to be an 80 mile day. Not that big of deal at this point especially considering it would be flat. Word on the street was that the reservoir had plenty of water so I decide not to carry the extra water and count on the reservoir and the Diagnus Well (a random well installed to help local wildlife).

Start trucking down the route. Really not that bad. It was interesting and very pretty in its own way. More colors then I would have thought. The well was going to be pretty close to the start of the day so I stopped to see where the pin was on my gps. Crap over shot it already by 5 miles. Unsure if I was going to have enough water to last me till the reservoir and didn’t want to be stressed out for the next 7 hours I turned back. What was going to be an 80 mile day was now a 90 mile day. Took me 45 minutes to go 5 miles against some brutal headwind.

Once I am all set I get going again. The amount of Pronghorned Antelope is pretty amazing but man are they scared of bikes. I get to see the wild horses and gasp with excitement. Oooh wild horses! Oh wait they are just standing in a field. If you guys could run that would be great. I also saw what I thought was a coyote… maybe. I was actually quite enamored of the Basin.

The good thing about seeing sky for miles is you can see the thunderstorms coming. The bad thing is that you see them coming and not a damn thing you can do about it. Maybe try to outrun but mostly you just wait for it to hit. So definitely got rained on again for about an hour but I could also see the blue sky on the other side so I knew it wouldn’t last.

Finally got to the reservoir at about 9pm. 92 miles.

Sidenote: my phone battery lasted the whole time and I listen to Trevor Noah’s Born a Crime. Highly recommend. 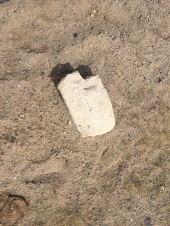 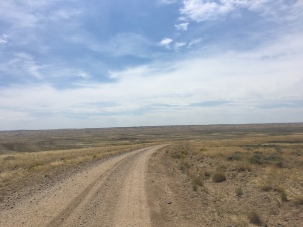 Ok second day, I am pretty done with the Basin. There was a lot of pavement and it was pretty hot until it started raining, then of course I was cold (I know Goldilocks). I get to Rawlins and it seems like the whole town is made of hotels. Well when in Rome. Get a hotel and head to Walmart for supplies. Texting with Kenny yesterday I realized through this section we are on two different tracks and his goes through Wamsutter. Decide to take the next day to meet him in him an easy 40 miles west. I have been biking on my own the last few days and it seems totally worth it. 40 miles is nothing at this point.

I get Thai food for dinner to eat something that doesn’t involve tortillas and does involve vegetables. Lady was a bit shocked I ate an entree and two appetizers. She obviously did not understand my calorie needs. It was delicious. 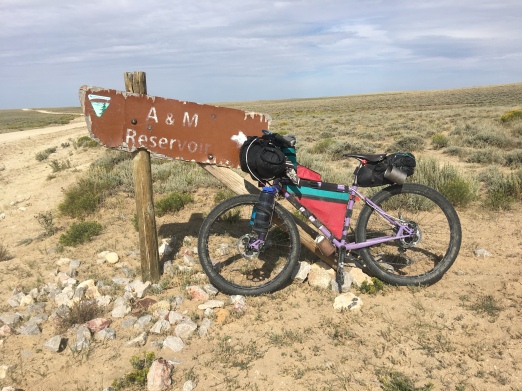 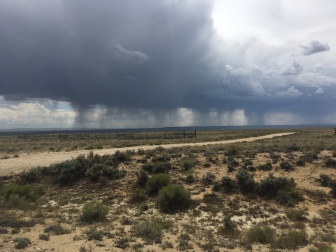 Oh good. About an hour later this dumped on me.

I hate this so much.

Google says there is a side road all the way. Turns out it was really multiple start and stop double tracks through peoples property. I did so much opening and closing gates or lifting bike over fences. I kept going because it always looked like it was going to get better just past the next bend. Then at some point I had gone too far to turn back.

Then to top it off it started raining. Seriously SO DONE with Wyoming. The track turns to that same clay/sludge we ran into previously. Though this time quite far from getting back on a real road. A lot of carrying and scrapping my bike. It takes me 7 hours to go 40ish miles.

I get into town and thank god Kenny had gotten the last accommodation, an honest to god double wide trailer. It was glorious. We watched Friends and talk about getting the hell out of Wyoming the next day. I thought I really wanted to leave Montana but that pales in comparison to how bad I want to leave Wyoming.

Google says I can get through.

Google said this was a road.

This is the day I lost my glasses. I now know who I am again. Stupid taking them off to put sunscreen on and then just never putting them on again.

It was also the first in 5 days I did not get rained on.

If Rawlins was built on hotels Wamsutter was built on doublewide trailers. Even the church looks like it was a double wide. Definitely not a town drowning in wealth.

Kenny and I set on down the dirt road. It’s very washboarded and lots of semi trucks but I did not care as it was a million times better then yesterday. The farther along we got the more lovely it got. I could reach out to Colorado. Fun rocks and descents with great views. Gasped multiple times.

We finally enter Colorado. I keep stating there better be some balloons or streamers falling from the sky when we enter but sadly there was just a subtle Leaving Wyoming sign.

I get to Brush Mountain Lodge and the owner Kristen gave me a giant hug and immediately offered me food. Three guys I had ran into two weeks earlier were there and all 6 of us chatted. Kristen gave lots of scoop on people who had been there recently. Later I sat in the hot tub after everyone went to bed just looking at the sky thinking how nuts/blessed it was that I was in that situation. Yeah way different then yesterday.

Oh thank god its not raining. 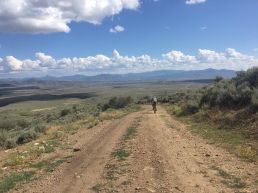 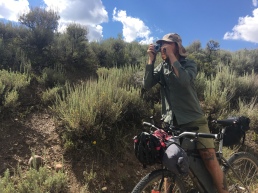 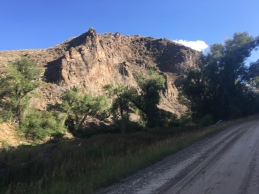 We fatten up with Blueberry Pancakes and eggs. Then force ourselves to leave. It was a great place that was hard to say goodbye to. I was ready first so I took off knowing Kenny would catch up. I don’t remember that much about today’s ride except the section that was so steep and rocky even Kenny had to do some walking. About halfway through I had to bring out the big guns… big guns being a 450 calorie hostess pie. The descent was fun and rocky but you had to be focused the whole time. The next bit I remember was a Huckleberry Ice Cream 🍦 then a lot of pavement into Steamboat Springs. We immediately eat at an organic cafe where I thought there might be a 50/50 chance my body rejects all those greens. I then go to The Orange Peel bike shop and get a bunch of maintenance done. Steamboat Springs is ridiculously cute but expensive. The cheapest hotel was $140. Ooofta

So steep even Kenny had to push. 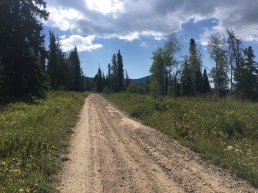 I don’t know if my body will know what to do with all this green.

My legs need a rest day desperately but my wallet really wants me to get out of this town. I decide to go out to Ute Pass Campground. I get breakfast in the hotel and run into The Young Dutch Couple. I mention that I need a rest day but my pocketbook wants me to get the hell out and will prob camp at Ute Pass. They mention that they thought about that too and decided “Well once we are up there we might as well go down”. I say goodbye to Kenny as he is gonna bust out some big miles. As always when it’s a town morning I leave way too late. I blame it on the fact that they have an organic grocery store. I truck along about 35 miles and slowly get to the top of the pass. It’s only 6pm. I hear the young Dutch couple in my head “you know you might as well go down”. This also gets me closer to the next post office where I have a package. I realized the next day was Saturday and some of the small town post offices are only open till 9:30am and I have no internet to check the hours of this particular this one. Dang nabbit there goes my rest day. Do another 25 down the hill and then some. I am sorry legs, I promise you can rest soon. Pull into camp just as it’s getting dark.

Omg my alarm goes off at 5am!!!! It was so dark out and cold. Break everything down and eat camp breakfast in a record 45 minutes. Start out in all clothes ever, including stocking cap under helmet. It was really pretty watching the sun come up over the hills. I roll into Kremmling at 8:30am. Hell yeah! Goal was 9am in case the post office closed at 9:30. Get to PO, apparently they close at noon. Oh well got a very early start of the day. I go get some breakfast.

I haven’t had a rest day since Pinedale. My legs are still fried but there is no way I am taking a rest day in this one street town. I decide to crack on to Silverthorne. It’s a bigger city with more stuff to do. This now turns my day into an 80 miler. My legs are super pissed about it but decide that fine, if I am going to be an asshole about it they will go on BUT only at a max speed of roughly 8mph

I finally pull into Silverthorne and immediately go to get food. The town is built around Outlet Malls.

As I am eating I get a message from Ed (one of the dudes I was traveling with) that said something like “I hear your not far behind. I just got into Silverthorne. Hopefully you will catch up”. EEEDDDD!!!!! Is in Silverthorne! YAY!! Oh shit he probably wants to roll big miles tomorrow. Oh god I am going to die. I stop at the store on the way to the motel Ed is staying at and purchase ANY and Everything with the words protein, recovery or muscle on it and a bunch of bananas. Anything that might make my legs not feel like turds stuffed into sausage casings.

I get there and holy crap he has a bit of a beard. We talk about our days since we parted the first time. So much has happened! I mention I was planning on taking a rest day and he was totally on board. Oh THANK GOD!!! I immediately stop swigging the muscle milk I was drinking. 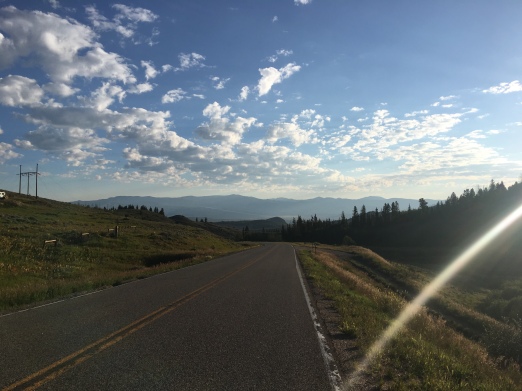 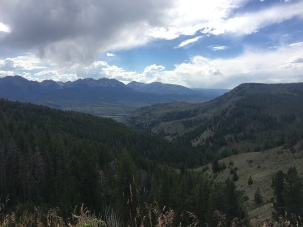 If banana’s had Tinder.